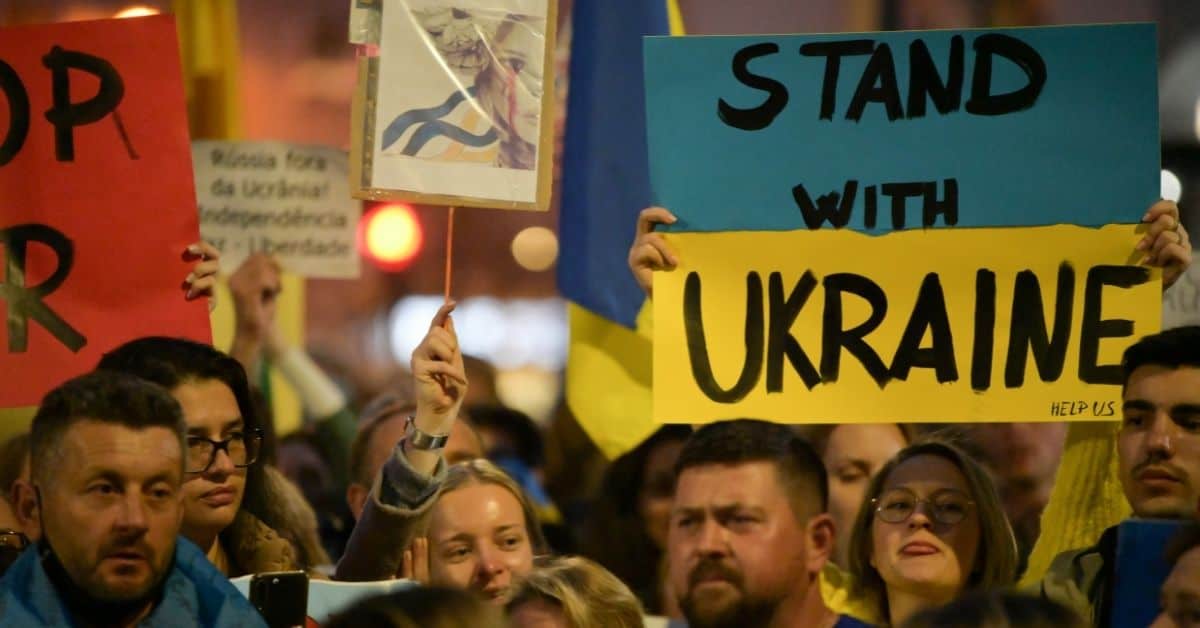 Shock, disbelief, heartbreak, fear, solidarity and pride. These are just some of the emotions that I, and my fellow Ukrainians, have felt over the past six days. However, I fail to find the words to describe or even reason in my mind how we let our world and humanity get here.

We live in a world with more capabilities than ever. As a society, we’ve come so far in many areas of our lives: technology, science, infrastructure, medical care, education and equality.  Yet a sovereign and peaceful country of 44 million woke up at 4 am to being bombed by an aggressor. While many European leaders were having calls and holding meetings to try to keep the peace, Russia already knew exactly how and when they would hit.

The world watched this unfold. We saw the warnings, we knew the history and we knew the track record; yet we were unprepared. While the West sought diplomacy, trying to “talk” and offer solutions, a dictator’s mind works completely differently. It’s full of delusion, conspiracy, anger, dominance, cruelty and self-righteousness. It’s a mind that has no place in the 21st century. Yet here we are.

On March 1, Russian missiles hit Kiev TV tower in Babyn Yar, the same exact spot where more than 33,000 thousand Jews were massacred by the Nazis in September 1941. We are literally watching history repeat itself.

How did we let this happen? What can we learn from this? What can we do differently in the future? On behalf of every single person in Ukraine, the two most important questions we should be asking ourselves right now are:

It’s not the Ukrainian war with Russia, it’s the world’s war against Russian tyranny. The future of global democracy depends on this fight. Global peace depends on the outcome of this war.

That’s why Ukraine got more support from world leaders in the past couple of days than we did eight years ago or even a month ago. We might not want to interfere, not to “trigger” another World War or not to “provoke” Putin, but the reality is the “beast” is already awakened…and he will not stop there.

Most of the world leaders have tried to approach this war with logic and diplomacy and that’s the problem. It doesn’t work. We know the mentality of our neighbor and we know that the only way to deal with Vladimir Putin is by being strong and decisive. Force and power are the only two things that he understands and respects, and over the past few days Ukrainian people and our army showcased exactly that. Now the rest of the world must follow our lead. Why?

As someone who was just there less than a month ago and whose family lives on the border with Russia and the temporarily occupied Donbas region (that my grandmother help rebuild after the Second World War with her own hands), I can tell you that there is not a single Ukrainian individual who needs to be “rescued” by Russia today.

We are outnumbered and outgunned, we have to defend ourselves from both air and ground, yet the second biggest army in the world failed in most of its strategic goals of taking over major cities, something that they thought they could do on the first day of their attack. This is one of the strongest military responses Russia has faced in its history. It’s because we are stronger, more dedicated and united than ever. We have been through many hard times, but I have never seen as much strength, bravery and solidarity among my fellow Ukrainians before.

To truly understand who we are and what we are made of, here are a few things to know about Ukraine right now:

“This is the moment of truth for Europe. How we respond today to what Russia is doing will determine the future of the international system. We must show the power that lies in our democracies. Nobody can doubt that people who stand up so bravely for our European values belong to our European family.”  – Ursula von der Leyen, President of the European Commission

Ukraine is the largest country in Europe. Our defence forces have grown over the past eight years, which is why we could put up a strong fight against the second largest army in the world. If the Russians defeat us, how will other smaller European countries be able to withstand this force?

We need the world to fight alongside Ukraine to put an end to this terror. It’s the only way that we can tell our children that we did everything possible so they can have a future with freedom and peace.

UNHCR has increased operations to deal with the hundreds of thousands of Ukrainian refugees. Its emergency fund is open for donations.

Lena Onupko is Competent Boards’ Alumni Relations Lead. Connect with her on LinkedIn